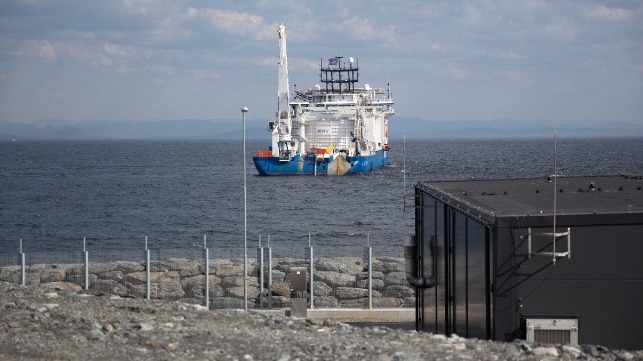 The laying of the cable supplying the Johan Sverdrup offshore development in Norway with power from shore started last week. The cable, being deployed by NKT Victoria, will help make the North Sea giant one of the oil and gas fields with the lowest CO2 emissions worldwide.

The starting point was the Johan Sverdrup converter station at Haugsneset near Kårstø, and by the end of May the vessel is expected to have laid nearly 200 kilometers of power cables out to the field. This will be a rate of about 10 kilometers (six miles) of cable a day.

Bundled with the power cables will be a fiber-optic cable for communication which will enable monitoring and, when required, remote control of parts of the Johan Sverdrup field’s operations from shore.

This makes Johan Sverdrup a key project to help deliver on Statoil’s ambition of reducing annual carbon emissions by three million tons by 2030, compared with the estimated emissions. The CO2 emissions avoided as a result of Johan Sverdrup using power from shore add up to more than 400,000 tons of C02 per year, equivalent to the emissions of some 200,000 cars each year.

Sverdrup is one of the five largest oil fields on the Norwegian continental shelf. With expected resources of between 1.9 and 3.0 billion barrels of oil equivalents, it will also be one of the most important industrial projects in Norway over the next 50 years.

Plateau production is estimated to account for 40 percent of Norwegian Continental Shelf oil production, and the project will have an expected recovery rate of 70 percent and a field life of 50 years. Peak production will constitute 25 percent of all Norwegian petroleum production at the time.

The field is located on the Utsira Height in the North Sea, 160 kilometers west of Stavanger. Oil from the field will be piped to the Mongstad terminal in Hordaland. Gas will be transported via Statpipe to the Kårstø processing plant in North Rogaland. Water depth is around 120 meters (390 feet), with the reservoir is located at a depth of 1,900 meters (6,200 feet).

After the start-up of the second phase of the development in 2022, the Johan Sverdrup field will also enable power from shore to reach the remaining fields on the Utsira High – Edvard Grieg, Gina Krog and Ivar Aasen.