Following on from a successful 2017: Leoni sets course for sustained, profitable growth

Following on from a successful 2017: Leoni sets course for sustained, profitable growth 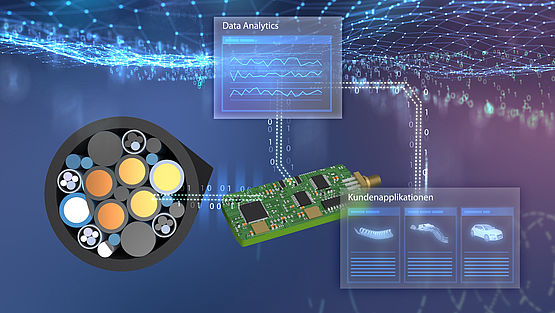 Leoni, a global provider of energy and data management solutions in the automotive sector and other industries, looks back contently on 2017. Due above all to the increasing momentum of demand, the Company’s sales rose by more than 11 percent to a new high of EUR 4.9 billion (previous year: EUR 4.4 billion), with organic growth coming to about 10 percent. Earnings before interest and taxes (EBIT) were up strongly from EUR 79 to 225 million, with the EBIT margin widening accordingly from 1.8 to 4.6 percent.

Along with the additional sales, improved operating performance – especially that of the Wiring Systems Division – also exerted a positive effect on earnings. Even when adjusted for all non-operational factors, consolidated EBIT grew by a substantial 29 percent to EUR 207 million in 2017 (previous year: EUR 161 million). Consolidated net income increased from EUR 12 to 144 million. Accordingly, Leoni intends to propose to shareholders at the Annual General Meeting to pay a dividend of EUR 1.40 (previous year: EUR 0.50) per share.

“Leoni successfully completed its 2017 anniversary year. We generated strong organic growth while raising profitability and investing in our continued expansion. We simultaneously formulated a new Group strategy. It ensures that Leoni proactively participates in shaping such future topics as digitalization, electromobility and autonomous driving, and that it supports its customers with intelligent solutions,” said Karl Gadesmann, CFO and spokesperson for the Board of Directors of Leoni AG, during the balance sheet press conference.

The Wire & Cable Solutions division’s sales were up by almost 7 percent to EUR 1.86 billion in fiscal 2017 (previous year: EUR 1.74 billion). Organic growth and favourable copper price effects consequently more than offset the sales lost due to the disposal of Business Group Electrical Appliances Assemblies (BG ES). The segment’s EBIT increased substantially, i.e. by one quarter, to EUR 105 million in 2017 (previous year: EUR 84 million) – this includes the non-recurring income of EUR 24 million from the sale of BG ES.

Leoni made substantial preparation for its future in 2017. Capital investment in property, plant and equipment as well as intangible assets increased by approximately one third to EUR 281 million (previous year: EUR 211 million), the focus having been on expanding capacity in Eastern Europe and North Africa. In Germany, Leoni invested EUR 33 million in its Factory of the Future.

Leoni is realigning its strategy to draw the best possible benefit from the opportunities arising from the dynamic market setting as well as the global megatrends. Both divisions already laid the foundations for this strategic transformation in 2017. The Wiring Systems Division repositioned itself as a solutions provider of data and energy management, offering car and commercial vehicle manufacturers a broadened portfolio of innovative products and services – especially for electromobility, connectivity and autonomous driving. The Wire & Cable Solutions division successfully advanced its digital transformation. The focus was on developing intelligent cables: this key technology, named LEONiQ, pursues the aim of making energy and data flows more efficient, secure and available.

Leoni expects its sales to increase to at least EUR 5 billion in the current financial year. Consolidated EBIT will range between EUR 215 and 235 million – thereby considerably exceeding the 2017 result adjusted for non-recurring income of approximately EUR 30 million. Given the good order situation, Leoni plans to invest a sum equating to about 5 percent of sales in 2018 (excluding the Factory of the Future) – a figure that is also the Company’s medium-term objective. In terms of free cash flow, Leoni is again aiming for a positive figure before dividends in 2018.

Based on the generally favourable prospects in the most important markets and on the Group’s new strategy, the Board of Directors expects consolidated sales to show an average annual growth rate of more than 5 percent by 2020. The EBIT margin is targeted to reach at least 5 percent in 2020.

(1) Earnings adjusted for the impact of revaluation as part of allocating the prices of the major acquisitions, restructuring, capital gains on the disposal of businesses and income from business combinations including related derivatives as well as the charges due to the fraud case