Hopes for Tasmania's 'Battery of the Nation' dangle by a cable, or two

Hopes for Tasmania's 'Battery of the Nation' dangle by a cable, or two 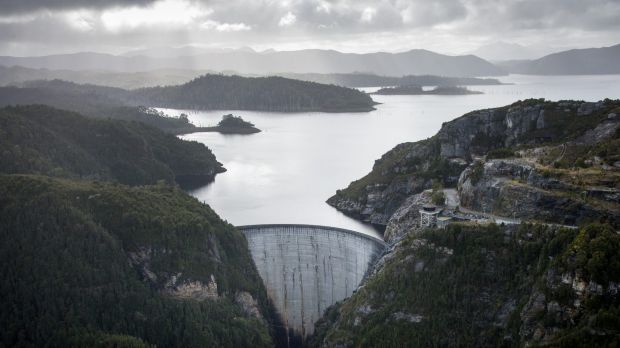 Back in late 2015, nine months before South Australia blacked out after an extreme storm event, Tasmania entered an energy crisis of its own. The single undersea high-voltage electricity cable linking the island state with the mainland failed about a 100 km off the Tasmanian coast. Engineers took six months to find and fix the fault.

In the meantime, an unprecedented drought – estimated to be a one-in-3000 year event – depleted the network of hydro dams that supply 90 per cent of the state's power.

The government cobbled together 80 diesel generators to supplement the only other major source of electricity, the Tamar Valley gas-fired power station – a plant Hydro Tasmania had just months earlier sought to decommission and sell because of its lack of use.

On the face of it, Tasmania shared many of the characteristics of South Australia's energy plight, including a heavy reliance on renewable energy, and soaring power bills.

But unlike South Australia, which the Turnbull government and some media outlets sought to make a national punchline for its relative dependence on wind energy rather than fossil fuels, Tasmania largely dodged opprobrium.

Instead – and perhaps surprisingly, given the cable calamity – Tasmania has emerged as a potential renewable energy powerhouse for Australia.

Indeed, there are reasons to consider the state's so-called "Battery of the Nation" plan to re-engineer its string of hydro dams to be more feasible than the heavily-touted "Snowy 2.0" project on the mainland.

Back in April, just weeks after his first helicopter fly-by to promote a giant pumped storage plan for Snowy Hydro, Prime Minister Malcolm Turnbull journeyed to Launceston to promote the merits of a similar scheme for Tasmania.

As with Snowy 2.0, Turnbull spruiked a plan – with the eager support of Liberal Premier Will Hodgman – to tap Tasmania's network of dams to bolster the reliability of the national electricity grid to take much more solar and wind energy.

Both plans would recycle hydro flows by linking reservoirs. Pumped hydro uses excess electricity at times of low demand to pump water up to a higher site where it is stored until periods of high demand, when it is released to flow back down through hydro generators.

Both were billed as providing enough electricity for 500,000 homes. In Snowy's case, the expected capacity would be 2000 megawatts of generation, while Hydro Tasmania would have 2500-MW of pumped storage.

And both would carry hefty price tags – although meaningful comparisons are impossible on the scant detail available so far.

Snowy Hydro released its first stab at a price estimate late last year, revealing a base cost of $3.8-$4.5 billion, a sum excluding the cost of extra transmission, financing and other imposts.

Sceptics, such Bruce Mountain, note the absence of economic analysis in the information released to date about the Snowy proposal, and consider its costs could double the stated range to exceed $7 billion, making it "inconceivable" it could be viable.

More details about the Tasmanian alternative will be revealed next month when Hydro Tasmania unveils a short list of about 15 prospective pumped storage sites along the north-west and west coasts.

An "indicative" price for the venture is $5 billion, which includes the additional interconnection and transmission costs. An added appeal for Tasmania is that its Battery of the Nation plan would also unlock as much as 2700 megawatts for private wind farms that would dwarf the 300 MW of turbines currently on the island.

"It's early days, but the outlook is very promising for pumped hydro storage," Chris Gwynne, Hydro Tasmania's director for the program, says.

Advocates for the Tasmanian plan are careful not to court trouble from the Turnbull government, which has been more aggressively promoting the Snowy alternative.

"Snowy 2.0 and the expansion of the Tas Hydro are distinct projects, with different proponents, proceeding on different timelines," Frydenberg, the federal environment and energy minister, says.

"Any decision to proceed with these specific projects will be taken by the companies responsible for their development," he says. "It is important to remember that Snowy Hydro has stated that Snowy 2.0 is both technically and financially viable, and can be funded off the company's own balance sheet."

Work by consultants EY for Hydro Tasmania, expected to be released next month, is understood to reveal a range of "market options".

One attraction of the Tasmanian scheme is that, unlike Snowy 2.0, it wouldn't require one monster project that would bear huge risk.

"You don't have to sign your grandmother away in one go to get the benefits," Gwynne says.

"We've got a whole bunch of sites we think are really, really cost competitive in terms of development," he says. "The tunnels that we need to build aren't that long."

Hydro Tasmania actually operates five separate hydro schemes. The shortlisted pumped hydro sites – pared down from a list of a couple of thousand – include linking existing reservoirs that are not currently connected, and creating small new ones.

None would affect World Heritage or other environmentally sensitive areas, Hydro Tasmania says, hoping to avoid any revival of the battles over new dams up to the 1980s.

"The vast majority of sites would need less than two kilometres of tunnel," Rowan Dix, a spokesman for the corporation says, addressing a costly and potentially the most challenging component of any pumped storage scheme.

By contrast, as Fairfax Media reported this week, Snowy 2.0 will have to find a home to dump a huge amount of rock – some 2600 Olympic-sized swimming pools' worth – produced by boring though 27 kilometres of rock to link the existing Tantangara and Talbingo reservoirs. All within a national park.

Anton Rohner, chief executive officer of UPC Renewables, sees the Battery of the Nation plan as "very much a staged development", with the potential for individual projects to be added as needed.

"It's not like Snowy, which is one single project that needs to assessed on its merits," he says.

Further wind farms or other renewable energy projects after that, however, would need a second, preferably larger cable under Bass Strait, Rohner says..

"We're expecting a second interconnector to be built by 2022, or in that zone."

"The interconnection story is really a critical part of the Battery of the Nation," Gwynne says.

Andrew Blakers, the Australian National University engineering professor whose team identified some 5000 suitable pumped storage sites around the country, agrees "nothing much will happen in Tasmania without one or two new interconnectors".

Even with more advanced technology than the 12 year-old existing cable – which has had its capacity capped to reduce the risk of another failure – the bill for a new one may exceed $1 billion.

That cost is among the obstacles Hydro Tasmania's plans will have to clear.

"They're up against thousands of [pumped hydro] sites in NSW and Victoria for which the transmission is easy," Blakers says.

Victoria's Minister for Energy, Lily D'Ambrosio, says a second interconnector "would be an advantage for wind developers in Tasmania" more than those in her state.

Still, the Victorian government has held discussions about one with Tasmania, and is "open to considering any proposal provided it's cost effective" and in the interests of her state's consumers.

"The current infrastructure is clearly insufficient during extreme weather events," D'Ambrosio says, adding the grid needs to be "fit for modern expectations", including enabling a transition away from fossil fuels.

Phil Bayley, an energy consultant with Value Adviser Associates who has advised the Hodgman government, also doubts the viability of a second connection, pointing to a feasibility study by John Tamblyn, released last April for the federal government.

"It essentially said the project was quite marginal and relied on the impacts of the national market, including the development of another interconnector into South Australia from NSW or Victoria," Bayley says. "It's not clear to me what has changed."

Another issue would be competition for use of the new cable – should another one built.

"The moment somebody builds a cable, the wind farm developers will rapidly saturate it," Blaker says.

Still, smaller pumped hydro ventures that get going early could meet market needs faster than a potentially decade-long project such as Snowy 2.0.

Says Blakers: "It really boils down to who goes first and gets the jump on other people in order to saturate the market for the next few years.

Whether Snowy 2.0 or the Battery of the Nation proceeds, the Turnbull government's advocacy for both sits uneasily with its opposition to federal and state Labor's advocacy of much greater renewable energy penetration, Blaker says.

"It's a total disconnect when the federal government says Snowy 2.0 is a really interesting pumped hydro scheme, which should be looked at seriously," Blaker says.

"And on the other hand, it criticises the ALP and other parties for saying we should proceed immediately to 50 per cent renewable energy by 2030, or 2025 or whatever date different states are looking at."