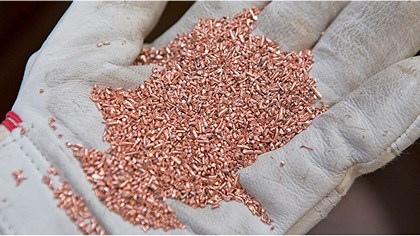 The automated processing of electrical and telecom wire and cables, sometimes called wire chopping for short, has been firmly entrenched as a recycling subsector in Western Europe, North America and Japan for several decades.

Dating back to the 1990s, the Recycling Today Media Group has tracked and updated a list of wire chopping operations in the United States, with the October 2015 version of the list (found here) showing 56 such facilities in the U.S. and another eight in Canada.

In North America and Europe, recyclers and the vendors they work with continue to invest in new wire processing systems and to upgrade old ones. For some of the vendors, additional opportunities also are arising in nations where wire and cable has traditionally either been processed (stripped) by hand or simply baled and shipped overseas. Increasingly, recyclers in these nations are beginning to join the ranks of automated wire and cable processors.

In early 2014, Denmark-based Eldan Recycling A/S announced the installation of one of its automated wire and cable recycling plants in Turkey.

In the first quarter of that year, Eldan finished delivering and then commissioned its first Combi

Line in Turkey. The Turkish customer, Ugur Metal in the town of Dilovasi, across the Bosporus Strait from Istanbul, has been processing cable scrap as well as some types of electronic scrap in the plant.

Eldan says the system installed there has an input capacity of up to 4 tons per hour. Ugur Meral, the owner of Ugur Metal, had been in business for many years prior to the installation, having started with more traditional activities, such as collecting and manual sorting and selling of scrap.

Meral says he saw the mix of incoming scrap was and is changing and told Eldan as he was shopping for equipment that he realized the need to think and act differently was important.

In 2010, Meral, Eldan Recycling A/S and the Eldan’s Turkish sales agent, Ferrostaal A.S. Istanbul, began negotiating. That process continued along with several reference visits to Eldan systems already in operation, and ultimately a tailor-made layout for the processing line was created. Meral told Eldan for a 2014 press release on the project that he had “from the very first moment the vision that the line should be as flexible as possible.” Thus, while it should be capable of operating automatically, it also should have an option for individual hand-picking when required.

“We are proud to commission this unique line for Mr. Meral here in Turkey,” said Henning Nørgaard, Eldan’s territory manager at the time. “The line includes our ring shredder, eddy current separator, rasper, granulator and [additional] separation equipment. We are happy to see the efforts we make together with our local sales agent in Turkey [have produced] results.”

Meral at the time said, “We knew from the beginning that our visions and ideas were a challenge for the equipment and solution providers in the international market. We did a scan and ended up with Eldan Recycling A/S, who has set up and commissioned the line to our full satisfaction.”

The previous year, across the Black Sea from Turkey in Ukraine, Eldan Recycling delivered and commissioned an E2000C Cable Recycling System to a company operating in that nation.

According to Eldan, the wire processing equipment was integrated into the customer’s existing production system to supply copper feedstock for its new copper and wire cable manufacturing process.

France-based wire processing equipment maker MTB Recycling displays a map of its worldwide installations on its website. While the largest clusters of MTB systems are in Western Europe and North America, the company also has placed systems into Taiwan, Singapore, Eastern Europe, Russia, the Middle East, South America and the Caribbean island of Martinique.

An online brochure created by Borouge says scrap “that is generated during cable manufacturing is sorted at the source and either reprocessed or recycled for alternative applications. A presorting of these cables is made as a first step, then granulation and separation of the plastics from the metal occurs.”

Borogue adds, “The main plastic components in cable waste from cables recycled today are PVC (polyvinyl chloride) and polyethylene, either in crosslinked (XLPE) or thermoplastic (PE) form. The separation technique in use today enables effective separation of the two main types. The PVC fraction can be remelted and processed to new products. As the separated components are less clean than virgin material, the recycled material is typically used in applications with lower quality requirements.”

The manufacturing sector in China has been expanding rapidly for more than three decades, and the postconsumer recycling sector there is likewise beginning to build up steam.

Manufacturers in China have long been importing wire and cable scrap from other part of the world to harvest the metallic and plastic feedstock, but for much of this time they have relied on manual labor to perform much of the work.

In 2013, Eldan worked with one processor in China to bring increased automation to its operation. The Danish firm worked with Tianjin Xinneng Renewable Resources Co. Ltd. on the installation of a 3-ton cable recycling line for its recycling facility in Tianjin, China, in the northern part of the country.

The system was designed to process up to 3 tons of cable scrap per hour into copper and aluminum granulate and plastic scrap. Since its installation, the Eldan equipment has been used to support Tianjin Xinneng Renewable Resources Co Ltd.’s Spanish and Italian-made copper smelting equipment.

“We are very proud that Mr. Zhang, president of the company; and Mr. Wang, vice president, found time to visit our factory in Denmark,” said Nørgaard, who also was Eldan’s territory manager for China at the time. “It is very important to us that everything works smoothly when the processing equipment arrives at its destination.”

The Chinese company has been in business for two generation and operates on a 300,000-square-metre (3.2-million-square-foot) facility, where it processes and dismantles several types of scrap, including wire and cable, waste electrical and electronic equipment (WEEE), end-of-life vehicles and plastic scrap.

“We were happy to visit the Eldan factory to see how the Danish people develop, design and produce all the equipment in their facilities in Faaborg, Denmark,” said Zhang after the 2013 sale was complete.

Toni Reftman, Eldan managing director at the time and now its CEO, said the company, together with its sales agent Beijing-based Ferrostaal, already had sold additional recycling equipment lines into China. “Although China is a heavy competitor on the world market for machinery, it seems that the Chinese managers of recycling companies appreciate that our equipment is designed for automated processing with surveillance only,” added Reftman.