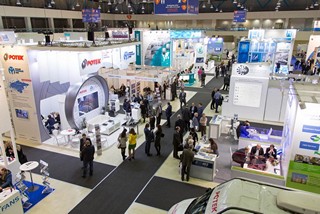 POWER-GEN Russia/HydroVision Russia exhibition & conference, held at March 3-5 at Expocentre, Moscow, proved its global status and showcased a change of focus: over 100 exhibitors from 16 countries worldwide, top-level delegates from Russian government, International and Russian business and expert community, discussed the matters of both the present and the future of the global energy sector and effective dialogue between all stakeholders, both domestic and foreign, who had come together to exchange their ideas and network.

In 2015 PennWell Corporation made the decision to change the name of the former Russia Power event to POWER-GEN Russia to bring it under the highly-respected POWER-GEN brand, raising the international profile of the Russian event. The new POWER-GEN Russia and HydroVision Russia is a platform aimed to present unique global and Russian power sector know-how, working groups and partnerships, all geared towards increasing the sector’s efficiency, as well as technical and technological modernization support of Russia’s power sector, including implementation of “smart” solutions.

“We hold POWER-GEN conference and exhibitions across the globe, so we believe the change of name marks a very significant step for our Russia event in its moving forward. We believe it sends a very clear message to the global electric power sector that our event in Russia is a major show that now sits alongside our two biggest events, POWER-GEN International and POWER-GEN Europe”, said Dr. Heather Johnstone, Event Director, POWER-GEN Russia, PennWell Corporation.

The 2015 Strategic Conference programme became a unique opportunity to raise the most crucial issues and gain professional commentary both from government representatives, Russian and international business community. The Strategic conference program covered the future of the Russian power sector, modernization of the existing plants and prospects of the new market models, state regulation, innovations, as well as discussion concerning the human capital role in the power engineering industry. In terms of the technical track, methodology, innovations, effectiveness and modernization of turbines, generators, and hydraulic structures and equipment were discussed, along with the dams and civil structures safety matters.

The event was traditionally supported by the Ministry of Energy of Russia, with the Ministry representatives taking part in the majority of 2015 sessions and panel discussions. Alexey Teksler, First Deputy Minister of Energy of Russian Federation, who attended the exhibition on the first day of the event, claimed events important platforms for industry leaders discussions, collaboration and other business ventures.

Marla Barnes, Event Director HydroVision Russia, Publisher and Chief Editor, Hydro Group, PennWell: “HydroVision Russia 2015 is an essential part of the co-located POWER-GEN Russia and HydroVision Russia event. We consider the strategic and technical HydroVision track and exhibition to be vitally important for anyone working in hydropower in Russia to become better acquainted with the tools and technology available to help them do their work better”.

Traditionally POWER-GEN Russia has attracted interested parties from across the globe. This year, there were more than 4,000 attendees from over 60 countries, 115 exhibitors, 27 sessions over 3 tracks, 70 international speakers, over 450 delegates and more than 100 media representatives despite the current economic and geopolitical situation.

Exhibitors pre-booking for POWER-GEN Russia/HydroVision Russia 2016 is open - send your application at http://www.powergen-russia.com/ru/contacts.html.

Get more information about POWER-GEN Russia 2015 and HydroVision 2015 and plans for the Year 2016 at the official events’ websites http://www.powergen-russia.com/ and http://www.hydrovision-russia.com/