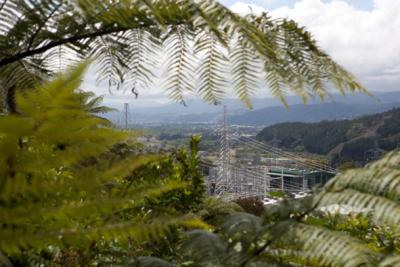 Haywards substation, some 20 kilometers from New Zealand’s capital Wellington, is one of the hubs for the country’s transmission infrastructure. Here, the 611-kilometer HVDC line from the South Island feeds into the North Island AC grid. The Living Energy team is on location to report on the new HVDC Pole 3, installed by Siemens.

Safety comes first. Quite literally. Before we’re allowed to set one foot into the Pole 3 compound, the whole team is given a half-hour safety induction by the Siemens site manager. There are strict safety regulations in place if you want to access an operating high-voltage substation – measures for work safety that have ensured that not one serious accident occurred in the four years’ construction time of the HVDC Pole 3 project.

Protected by hard hats, safety goggles, safety boots, and overalls, we later stand in the high-voltage DC switchyard, with the electricity buzzing over our heads. We tread on the marked paths, with all due vigilance avoiding getting closer to the equipment than absolutely necessary – and can only imagine what it must have been like as the concrete was poured, footings were installed, and equipment connected while 350,000 volts surged above the engineers and workers.

Andrew Gard, Transpower’s Project Director of the HVDC Pole 3 project, explains the significance of Haywards for the country’s infrastructure and why it was impossible to take the substation off line for the works. “Fifty percent of the nation’s total power is supplied by hydro generating stations in the south of the South Island, but three quarters of the population live in the North Island, one third of the population in Auckland. If Haywards failed or stopped for even a few hours, the consequences for the national economy and well-being could be quite significant,” he says.

“New Zealand is on the Pacific Ring of Fire. It’s in an earthquake zone,” Andrew Gard explains. “That was a significant challenge for Siemens. Behind us you can see a smoothing reactor mounted on a seismic damping system.” We marvel at the large piece of equipment, several meters high, mounted on huge springs. “Similarly, the valve hall is built on lead-rubber bearings so that it can move gently in an earthquake,” he adds. Once we start looking around, we notice that every piece of equipment on site is protected by some kind of damping from seismic shocks – be it springs, or coils, or extra slack added to the cables. The highest seismic building standards were applied to Haywards substation, which is located a mere 300 meters from a major fault line.

Our journey has taken us from the reservoirs of the South Island via New Zealand’s political center to Haywards, where the North Island’s AC grid is supplied with South Island hydropower – safeguarded against earthquake damage.

It’s a wrap – also for Andrew Gard, who is about to leave on his first, well-deserved holiday in a few years. “Oh – look, its been a long hard journey,” he says as we walk out to the car park. “It’s been a couple of years without holidays, for me and probably a few others. Projects are like that for us. We are project people. We enjoy working in a team and we enjoy the challenge. It’s really nice to have got there. We are all very pleased.”