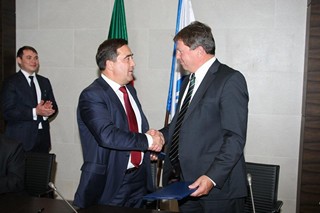 On September 8 Ensto company and JSC "Grid Company" signed an agreement on cooperation in the field of supply of gas-insulated switch-disconnectors.

JSC "Grid Company" plans to install gas-insulated switch-disconnectors for the first time on overhead 6-10 lines. The main advantage of this device is its ability to remote control, as well as reducing the time to seek damages on the line and localization of the damaged section of the overhead line.

- We are implementing in their production advanced design - elements of "smart grids", which are widely distributed in the world - Il'shat Fardiev said during the signing of the Agreement. - Another obvious advantage of this equipment is its design, which ensures maximum safety for maintenance personnel.

Recall, the decision to install 18 gas-insulated switch-disconnectors ENSTO was taken during the visit of the Finnish delegation to Tatarstan in July this year. Choice of this "pilot" for Mamadyshsky area was dictated by the geographical extent of the area. Remoteness of some power lines are causing difficulties operating personnel when searching the injury site and delays the process of re-energizing consumers. The use of sulfur hexafluoride switches significantly reduce outages.

The price issue is attractive too- purchased equipment is thirty percent cheaper than existing counterparts. In general, more than twenty million rubles were directed for the purpose of "Network Company".

During the lifetime (30 years) ENSTO switches do not require maintenance. Operation costs are only a paid message transmitted by GSM-channel, said Markku Vederhorn. In addition, once every five years the battery control unit is to replace.

Supply and installation of the first batch of switches will be accompanied by technical specialists ENSTO, which will hold trainings for employees of JSC "Grid Company". In the future, the Finnish company plans to open on the basis of Kazan energy technical engineered landfill for training specialists.

- Automation of distribution networks made under the highest for this year program of JSC "Grid Company", - the Deputy General Director - Technical Director Rashat Galymzyanov informed. - On the modernization of 6-10 kV in this year will be allocated 450 million rubles.
Representatives of the manufacturer tried to accommodate the wishes of Energy, the adaptation of equipment, in particular, take into account our climate. In the Finnish company experience in supplying equipment for Karelia has already taken place. It is assumed that the switch will go into the country before the end of October, which will install and put it into operation before the onset of the autumn-winter period. Thus, JSC "Grid Company" in partnership with ENSTO increase the reliability of electricity supply.