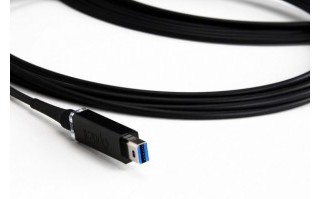 At the Intel Developer Forum in San Francisco, Corning announced that it has received certification for optical cables Intel Thunderbolt, the first fully fiber-optic cables. According to the company announcement, the cables support the protocols of Thunderbolt and Thunderbolt 2, and will be available in the near future.

The creators have reported that the cables "went through a rigorous certification process" and are available in sizes from 10 meters. Unlike public copper cables of Thunderbolt, fiber optic cables are 80 percent lighter and 50 percent smaller in diameter. They are also made of sound and electric protective material.

The date of receipt of the cables in the sale has not been declared, it is only known that it would be "in the following months." Corning will demonstrate the possibility of fiber optic cables on the IDF, giving demonstrations of speed, durability, and other similar factors on its stand.